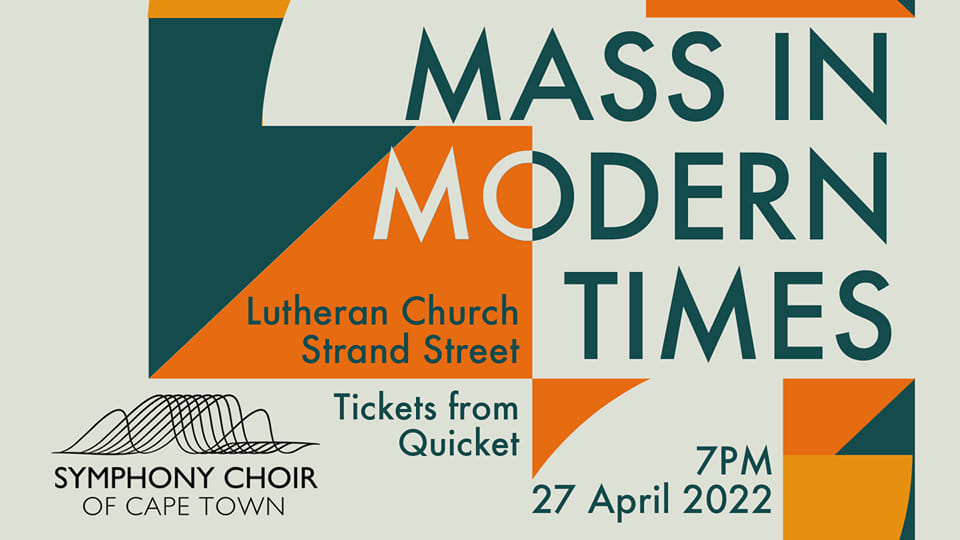 Cape Town is in for a treat with the Symphony Choir of Cape town’s next concert on the 27th April, in the Lutheran Church.

The Director, Levi Alexander, will lead the choir through a number of shorts works, each as beautiful as the next.

Ola Gjeilo’s Northern Lights was inspired by the beauty of the Aurora Borealis. Gjeilo wrote this during Christmas of 2007 “whilst looking out his attic window at a wintry lake! It is a reflection on the “‘terrible’, powerful beauty of one of the most beautiful natural phenomena ever witnessed, although the music is quite serene on the surface”. From – Kathryn Louderback : A Pianist’s Musings.

The second work, Prayers and Dances of Praise from Africa, is performed in tribute to the late Peter Klatzow,. “This is one of Klatzow’s most frequently performed works and was published and first performed in 1996. The work comprises four prayers sung ……… a cappella by the choir……..interspersed with three dances of praise played by brass quintet. The texts are by Archbishop Desmond Tutu and leave no doubt as to their apt description as indigenous South African works”.
From – Marianne Feenstra : Klatzow’ Choral Music; spirituality & liturgy.

“Missa Prima Lux Australis, by Christopher Cockburn (Mass for a Southern Dawn) was composed in 1994 for performance at the National Arts Festival service in Grahamstown Cathedral, where the composer was organist and choirmaster. It is written for SATB choir (with divisions) accompanied by marimba and other percussion instruments. The four movements are strongly contrasted in character, and the work combines modal counterpoint with elements of African music”. From – Classics.co.za.

This is followed by the well-known Traditional Spiritual: The Battle of Jericho, by Moses Hogan. “The Old Testament book of Joshua, Ch 6, records the account of the Israelite army overthrowing the city of Jericho. It is believed that slaves composed the song in the early 19th century, and it was first record by Harrod’s Jubilee Singers in 1922. Moses Hogan was acclaimed as a composer and arranger of African-American spirituals”.
The TabernacleChoir.com/articles.

The concert is brought to a close with Bob Chilcott’s beautiful and intriguing: A Little jazz Mass. “[This is] a highly original and effective concert setting of the Latin Missa brevis in which the various movements embrace a variety of jazz styles. Chilcott’s jazz influences truly come to the fore in A Little Jazz Mass: The Kyrie has real groove, the Gloria swings, the Sanctus sits right back while the Benedictus hums along, and the Agnus Dei draws inspiration from the Blues. The voices are underpinned by a characterful piano accompaniment …… and bass and drums join ad lib, giving the flavour of an authentic improvised jazz trio. A Little jazz Mass is one of Chilcott’s most celebrated and popular choral works to date, and has received countless performances (both on the concert platform and as part of the sung liturgy in church services) across the world, perhaps most notably at St Paul’s Cathedral, London”. © Oxford University Press. https://global.oup.com/academic

Book your tickets (R200) through Quicket now so as not to miss this exciting concert.