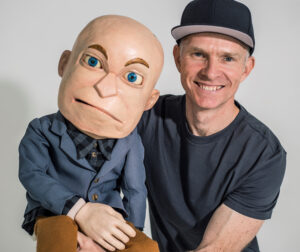 Chester Missing is South Africa’s most famous puppet, outside of Parliament. His sidekick is double EMMY nominated ventriloquist, Conrad Koch. In this side-splitting comedy Conrad wants Chester to help South Africa heal its racial divisions, but Chester has some awkward and very funny questions. Shame. Guided by Conrad’s Master’s Degree in social anthropology these two recipients of the Ahmed Kathrada Foundation’s Anti-Racism Award hilariously tear into the big questions about apartheid, white privilege and people who say ‘I don’t see colour’. At least that’s the plan. But when puppets are involved nothing ever goes to plan. Ask the Guptas. ‘Nice Racists’, because being nice doesn’t mean we are not racist. Tell Helen.