ONE NIGHT STAND UP – THE ROCKEFELLER HOTEL

ONE NIGHT STAND UP – THE ROCKEFELLER HOTEL 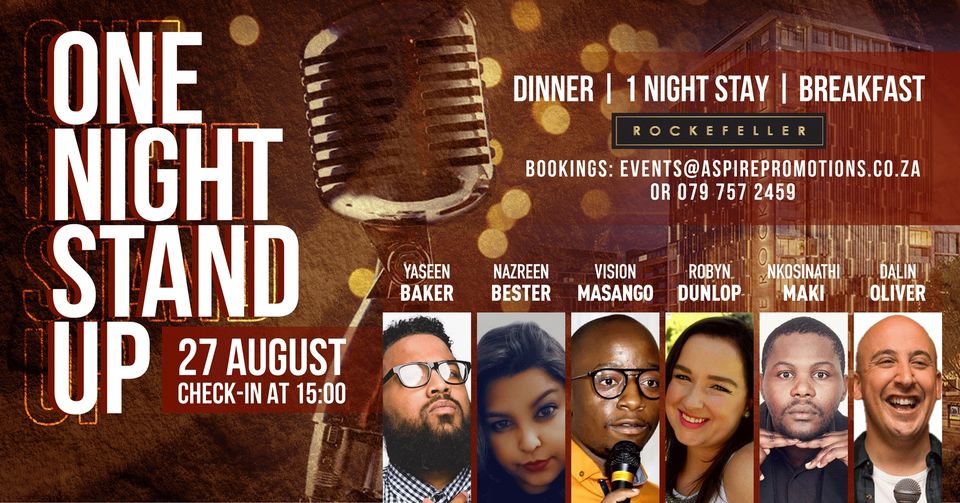 One Night Stand Up is A BRAND new Comedy Hotel Tour with a great overnight experience, Buffet Dinner, Breakfast and comedy by SA’s finest comedians.
Be Entertained with a great lineup of comedians, Dinner, 1 Night Stay & Breakfast
Venue: The Rockefeller Hotel
Dalin Oliver, was on a national tour with his third one man stand-up comedy show, Adulting, before covid-19. Stay laughing with him during lockdown by heading to Showmax where you can watch one of his three stand-up comedy specials I Came, I Taught, I Left, Face For Radio and Day Zero: The Water Shortage Comedy Tour. Dalin is one of SA’s Top Comedians and will be headlining the show
Yaseen ‘The Bakerman’ Baker started his comedy career in 2019 and has had a metaphorical rocket strapped to his back ever since. After a few months in, he opened for the likes of Nik Rabinowitz and Rob Van Vuuren and has also gone on to running regular comedy shows across Cape Town. With graphic design an art direction as his bread and butter, Yaseen brings a unique twist on the day-to-day happenings.
Nkosinathi Maki’s big break with Jive Funny Championships win
After 11 years of trying to break into the comedy circuit, he secured a nightly spot at the Cape Town Funny Festival at the Baxter Theatre after winning a competition. His break came after he beat 65 comedians doing stand-up over four weeks to clinch the tittle as 2022 Jive Funny winner on June 4. He is one of the regular names in the comedy circuit and headline many shows in SA.
Robyn Dunlop is a young comedian and actress, taking on South Africa and the World! She’s an adventurer that spends most of her time figuring out how to get to a new place to perform in and what she’ll say when she gets there. So far she’s successfully landed in Johannesburg (home), Cape Town, New York City, London, Los Angeles and New Orleans.
She loves loves loves making people laugh! Exploring different ways to do this she has had Improv and Acting training as well as hundreds of stand-up sets and many a giggle around the dinner table. Her connection with the world drives her to explore different mediums and she’s just getting started.
Bookings: events@aspirepromotions.co.za