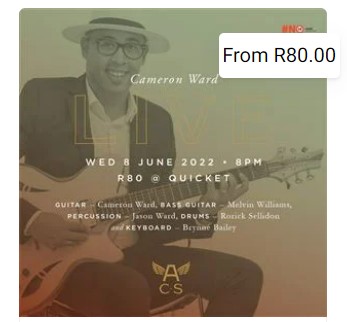 “I promised Bra Hugh that I would carry on his legacy.”

Legendary South African music icon Hugh Masekela lauded Cameron Ward as “one of his favourite musicians.”  A member of Masekela’s band from 21, Ward is now poised to establish himself as an international solo artist, with ambitions to one day take his place among the giants of South African music.

From the very beginning in Lotus River, the strength of his church-going mother shielded a young Ward from local street gangs and music played a pivotal role. His first ‘gig’ at age six was playing the drums in the church band! This in turn morphed into piano, which in turn gave way to guitar. Now, Ward is already a favourite both in the U.S. and Europe, known for his improvisational panache and honed rhythm guitar, not to mention unmatched showmanship skills. Playing in sold-out jazz clubs and festivals worldwide alongside Masekela will do that for you.

Music critics have called Ward “hands-down one of the most versatile musicians of his generation.”