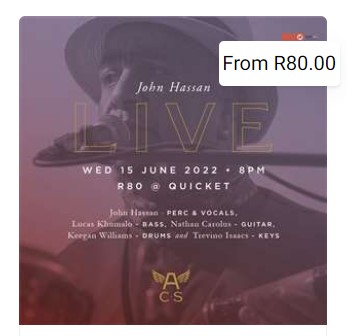 John Hassan (AKA Hassan’adas) is a sought-after percussionist, composer, arranger and producer who has been cultivating his craft of jazz percussion for over 20 years. He has featured on over 100 albums, performed on tours worldwide, and engaged in a long list of collaborations with local and international artists.

Recently he announced a new album, Asante Sana. While the first album was driven by keyboards and a full drum-kit, Asante Sana uses percussion instruments and a grand piano. It’s a concept album that leans towards the acoustic, but also features a whole host of other talented artists and instruments. Listeners can expect new music with a pared-down sound played with the same energy and conviction Hassan’adas is known for. Enjoy a melting pot of influences played in the beautiful setting of Athletic Club and Social’s Trophy Room and Whisky Bar.