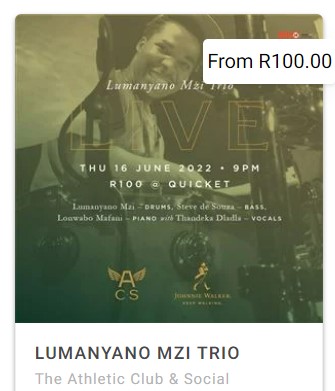 A largely a self-taught musician, Lumanyano became influenced by jazz and gospel music when he started playing at church at the age of 12. His drumming career started at the age of six when he snuck out of his home and wandered some 15km to watch his father rehearse reggae. In a happy twist of fate, the band found that the drummer had not come to the rehearsal. On that day, he amazed his father with his knack for playing the drums and made his musical debut.

He then went on to study Jazz Performance at the South African College of Music University of Cape Town and graduated in 2017.

Lumanyano has toured and performed with local and international artists such as:

He continues to work as a session musician and performing artist. Collaborating with many local and international musicians and artists as well as performing in musical theatre.

Lumanyano and is currently furthering his studies at the Berklee College of Music in Boston, United States of America.